Goin’ to a Happening 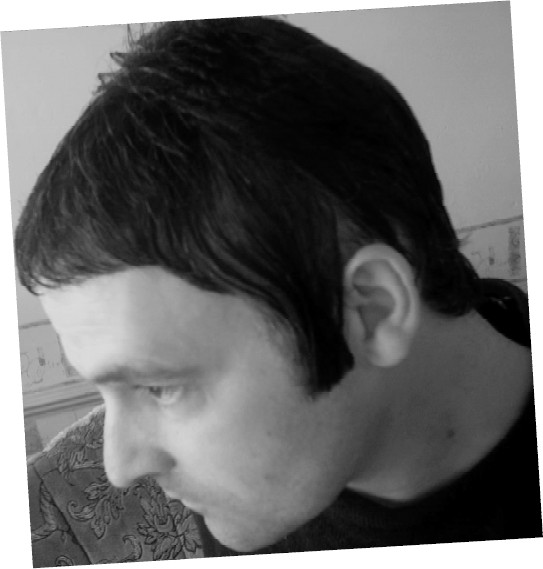 Got the Mojo Talkin’

Jayne: Tony, how about a brief introduction about yourself?

Tony: I am a complete music obsessive, record addict and a writer/designer. I enjoy music, books and flexing my creative muscles via my writing, book design and associated work. The passion and commitment for these is a positive and constant source of motivation within my life.

Jayne: When and how did your record collecting begin?

Tony: My very first bought album was in 1971 and was a Best of James Bond Film themes on the MFP label from the upstairs record dept. of Boots in town. My very first love of music was Film soundtracks, a genre I still enjoy to this day. My older brothers were 10 and 18 when I was born in 1965 so their influence on me also made an impact. The oldest one had been to see acts such as The Who, The Kinks and other such groups, along with trips to Sheffield’s Mojo club, though he was not a mod: in fact his first music initiation had been rock ‘n roll in the 50s.

By the early 70s my next brother up was into David Bowie, T-Rex, Mott the Hoople and other Glam acts of the day, amongst other genres. This was an early and profound influence for me and, in some respects; this is the point in time I can mark as the origins of my record collecting. I was charged with looking after his considerable collection of singles (we had very few albums in the house) and I would store them in a rack, sticker the record labels with a number of order and sometimes cheekily scribble my own review of them on the labels – such critically precise summaries as ‘Crap!’, ‘Fab’ or with the case of Golden Earing’s Radar love, ‘Heavy stuff!’ Whenever hastily-arranged parties occurred, or even if a couple of my brother’s friends paid a visit that involved record playing, I would annoyingly insist on my services being used in locating their choice of records.

Although these records were not yet actually my own as such, the collecting bug had truly made its initial mark upon me. Apart from the rich euphoric sounds contained within the grooves, I loved the T-Rex label and their company sleeves, sadly often torn as we didn’t have any of those PVC protective sleeves at the time. I was equally mesmerised by the concise amount of miniscule detail contained on just one circular record label. But most of all, a selection of those records became firm lifetime musical favourites. Singles such as Bowie’s Life on Mars and Starman, T-Rex and Children of the Revolution and All the Young Dudes by Mott the Hoople. Also – in line with my love of Film and TV related incidental music – The Theme from the Persuaders from John Barry.

Another pivotal signpost was, when around 1975, the older lad next door to us, gave me his whole collection of singles. These were lacking any covers whatsoever and were as a consequence both wellplayed and in often pitiful states, but they were all playable, crackles, hisses included, and proved to be a positively diverse set of recorded genres, ranging from country/rock, 70s soul, pop, folk and glam etc. Perhaps those early formative days were partly responsible for my later year’s affliction for so many different genres across music?

Jayne: What are some of your earliest recollections of serious record buying and being introduced to early soul and r&b music? 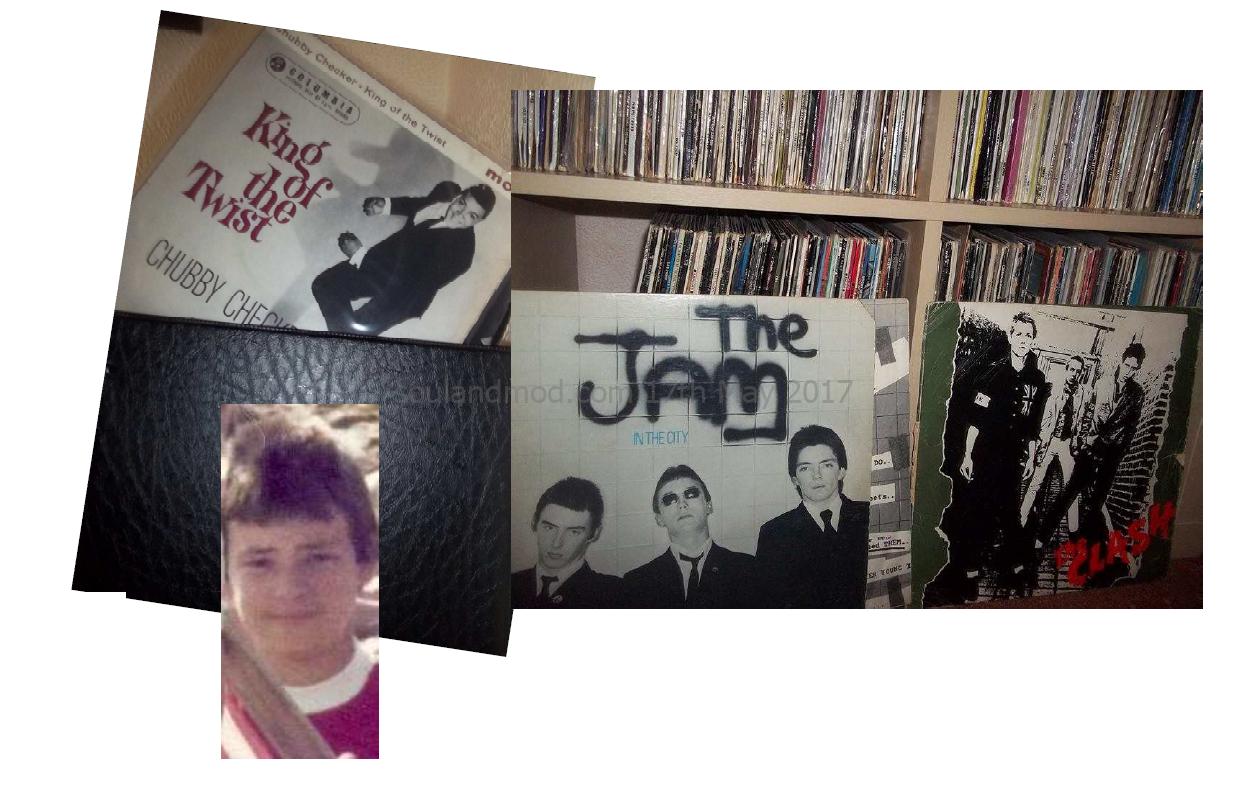 Tony: Rewinding somewhat to source those initial introductions. Punk had essentially been my calling at the tender age of 12. This had been preceded by a brief but fun-filled revival of rock ‘n roll through the likes of Chubby Checker, Billy Haley and the Comets and the timeless classic Wooly Bully by Sam the Sham and the Pharaohs – all being spun at the youth club disco during the latter days of 1976. Yet, this love for the raw basics of rock ‘n’ roll’s early offerings gradually gave way to an increasing affinity with the sheer energy, danger and anti-authoritarian stance of the new and exciting music coming out of the new wave of punk. This was a formidable time of influence. The music and refreshing attitude of punk fit me like a glove. From the late summer of 1977 and into 1978 and 79, I accumulated as many records related to the new wave as I could, many only of the vaguest association such as the first Squeeze album and singles by The Motors, Nick Lowe, TRB, Elvis Costello and the Attractions, Radio Stars, Blondie etc: Also more definably punk records that included early releases from The Stranglers, Generation X and, of course, The Clash amongst others. There was also a tiny collective of like-minded mates of mine who avidly tuned into punk; sadly we were way too young to see the bands at this point in time, but for us the records, the attitude, creativity and rejection of impending adulthood were the true authentic ideologies: Our own little suburban revolution of a sort?

The spark for this new beginning had been The Jam and their singles All Around the World and The Modern World. Although The Jam have since been profoundly associated with mod itself – and positively influenced a huge number of individuals and bands to embark upon lifelong mod journeys – I considered The Jam to be firmly within the punk and new wave camp, so to speak, albeit with their own separate identity and Weller’s mod obsessions on board. It was also a direct result of listening to The Jam, that I came across B-sides containing sped-up live renditions of 60s soul classics such as Sweet Soul Music and Back in My Arms Again and also, contained on their This is the Modern World LP of late 1977, their punked-up version of Wilson Pickett’s 1965 classic In the Midnight Hour. Ironically, Wilson Pickett had performed at a local venue in 1965, almost on my own doorstep, ha for a time machine at hand!

By the dawn of the new decade, if not well beforehand, punk had become a musical cul-de-sac and a parody of its original intentions. I had already started to indulge in old Tamla Motown records and a selection of bands commonly associated with mod: including bands such as The Who, Kinks and Small Faces. My introduction to The Who had, in fact, been a 3 track maxi-single I bought by chance from a small family-run record shop – a short distance away from where I lived – in late 1976 and containing recordings of Substitute / I’m a Boy / Pictures of Lilly – although at that point I was unaware of their mod connections. Coincidentally, around mid-1978, my oldest brother spotted me wearing a pair of Jam shoes and took the piss out of my jeans I was wearing with them, laughing and saying something along the lines of “If you wanna look like a mod, you need a proper pair of trousers to wear with them.” I honestly didn’t have a clue what he meant at that point. The shoes were worn in homage to one of my greatest punk era influences. What exactly was this mod thing he spoke of?

Jayne: From those early recollections, what were some of the records that you first purchased related to this genre of music, i.e.; soul/r&b 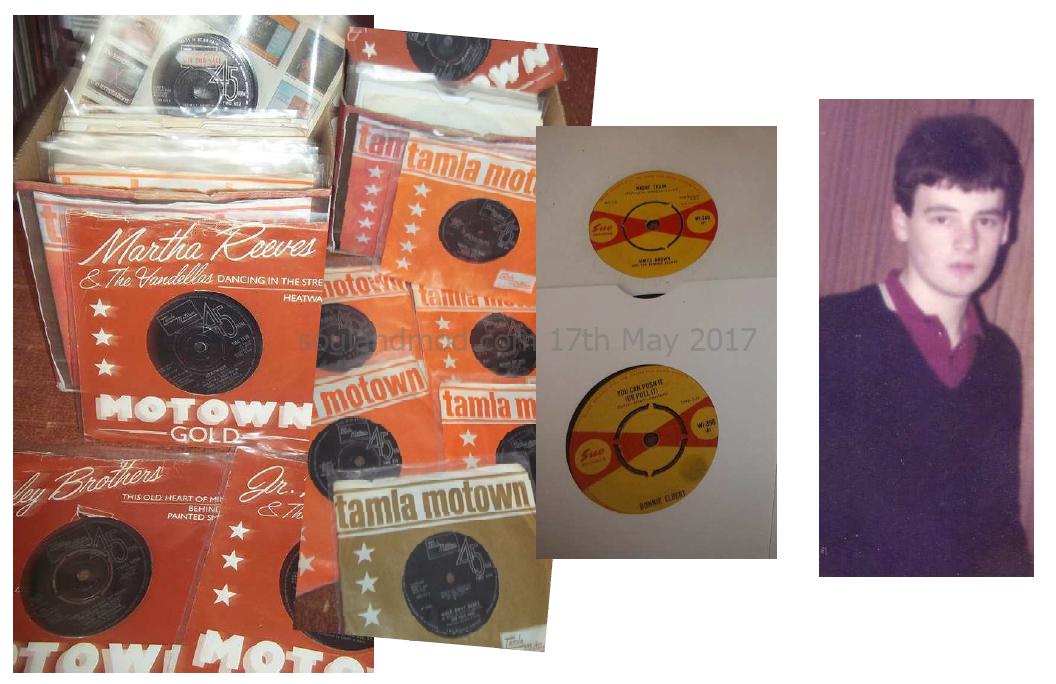 Tony: The first ones would be those Tamla Motown re-issues in the brown sleeves. Records such as Dancing in the Street and Heatwave (Martha and the Vandellas), I Can’t Help Myself (Four Tops) and records from The Elgins, Marvin Gaye, The Temptations, Marvellettes and Stevie Wonder amongst others. The first track by Stevie Wonder that really impressed me was Contract on Love, which I seem to recall, sat on a B-side of a single I had [also released as a US issued 45]. From there I moved onto the Atlantic label, then later on Stax and records such as Eddie Floyd’s Big Bird and releases from the likes of Sam and Dave and Booker T and the MGS. These were later followed by whatever I could find on the greatly respected UK Sue label: the first Sue label 45 I bought was Night Train by James Brown, followed by Donnie Elbert’s A Little Piece of Leather. Another label I have fondness for is the Pye International label, specifically the r&b series. These records, re-issues aside, were all years since deleted and were not so easy to find without a certain amount of determination, though, thankfully, when I did, I found them mostly encouragingly cheap.

If you do not have an account with us you can register by clicking on the link below.

Registration on Soul and Mod is free and only takes a minute….Register